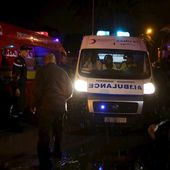 At least 13 people were killed in Tuesday's apparent suicide bombing of a Tunisian presidential guard bus in central Tunis, prompting the government to declare a state of emergency and tighten ...

Tunisian authorities said on Wednesday a suicide bomber wearing a vest packed with plastic explosive blew up a presidential guard bus a day earlier, killing at least 12 troops in an attack claimed by Islamic State militants.

Tuesday's explosion on a main boulevard in the capital drove home the vulnerability of Tunisia to Islamist militancy, following assaults on a seaside tourist hotel in June and the Bardo Museum in Tunis in March also claimed by Islamic State.

One of the Arab world's most secular nations, Tunisia has increasingly become a target for militants after being hailed as a beacon of democratic change in the region since its 2011 uprising ousted autocrat Zine Abidine Ben Ali.

"This attack is an evolution in the behavior of the terrorists, this time they attacked a symbol of the state and in the heart of the capital," Prime Minister Habib Essid told reporters after an emergency security meeting.

It was the first suicide bombing in the capital. In October 2013 a bomber blew himself up on a beach in Sousse, and previously an al Qaeda suicide bomber attacked the synagogue in Djerba, killing 21 people.

Islamic State, whose insurgents control large parts of Iraq and Syria and are also active in Libya to Tunisia's east, claimed responsibility on Wednesday for the Tunis attack, according to an official statement.

It included a photograph of a man, wearing a headscarf, a white robe and bomb vest, who it said was the bomber and named him as Abu Abdyllah Tounsi. The name suggests he was Tunisian himself.

"The Tyrants of Tunisia must know there is no safety for them. We will not stop until the laws of Allah are applied to Tunisia," the statement said.