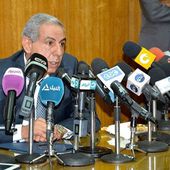 Egypt signed a $500 million agreement with the African Export-Import (AFREXIM) Bank to fund the country's exports to African countries, said Tarek Kabil, minister of industry and foreign trade on Thursday in a press release.

The Cairo-based Bank had proposed last month to arrange a facility of up to $1 billion, underwriting $500 million of the amount, for the country’s central bank to improve foreign currency liquidity, Afreximbank stated on its official website.

Through this programme the bank will support Egyptian companies in the process of export. The bank could also double the funding to $1 billion if the first proves successful, Benedict Oramah, the head of Afreximbank was quoted as saying in the release.

Egypt faces a foreign currency crunch since tourism and foreign direct investments, its main sources of foreign currency, were hit in the aftermath of the uprising in 2011 that toppled president Hosni Mubarak.

The Arab country signed last week a $1 billion loan deal with the World Bank as part of a $3 billion loan dispersed over three years, representing an alternative to fading Arab gulf aid.

Egypt plans to establish five new commercial bureaus in Ghana, Uganda, Tanzania, Cote d'Ivoire, and Djibouti, according to the release.