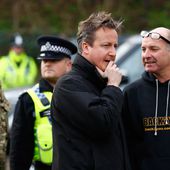 "There are always lessons to be learned and I will make sure they are learned," said David Cameron after severe flooding affected thousands of people across the country. But that was in February ...

“There are always lessons to be learned and I will make sure they are learned,” said David Cameron after severe flooding affected thousands of people across the country. But that was in February 2014, when the prime minister was visiting the submerged Somerset Levels. No systematic review of flood protection ever happened.

On Sunday, as terrible floods hit Yorkshire and Lancashire, Cameron said: “Whenever these things happen, you should look at what you spend, what you’ve built … clearly we should look again at whether there’s more we can do.”

The people living in the 5m properties that are at risk of flooding can only hope he means it this time. For the thousands currently condemned to months away from their ruined homes it is a case of closing the floodgates after the rivers have overflowed.

Cameron cannot say he was not warned: he has ignored red flag after red flag, right from the start of his premiership. In the first year of the coalition, he cut capital spending on flood defences by 27% year-on-year. That was despite the2008 Pitt Review – a systematic analysis of major floods in 2007 – concluding that much more funding was needed. Funding had risen quickly under the Labour government, only to be slashed by Cameron.

The prime minister himself had expressed the risks. “Most people accept that, with climate change, [floods] are likely to be more frequent,” he told parliament in May 2008, following flooding in his Oxfordshire constituency.

Flood defence spending never recovered to the level inherited from Labourduring the whole coalition parliament, if you exclude – as the National Audit Office deems appropriate – the emergency funding delivered after flooding 2013-14.

In January 2012, the government’s own research showed increased flooding is the greatest threat posed by climate change in England. But when heavy flooding hit in the summer of 2012, the Guardian revealed that almost 300 proposed flood defences had not gone ahead as planned following the cuts.

A £58m scheme in Leeds – one of the cities hit in the latest round of flooding – was one affected project, which would have saved many times its cost in avoided damages. Richard Lewis, a city councillor, said at the time: “The cuts are the economics of the madhouse.”

Adapting to climate change, principally flooding, is the responsibility of the Department for Environment, Food and Rural Affairs. But in May 2013, the environment secretary at the time, Owen Paterson, cut the number of officials working on the national adaptation programme from 38 to six.

Global warming means more extreme weather, with records increasingly likely to be broken, and the wettest winter for 250 years in 2013-14 caused huge floods across the country. The Guardian revealed at that time that flood-stricken communities, including those visited by Cameron in the Somerset Levels and Yalding in Kent, had been left without planned defences following funding cuts.

Other undelivered defences include schemes on the stretch of Devon coast atDawlish where the mainline railway fell into the sea and near the nuclear power station at Hinkley Point in Somerset. The Thames Valley also saw flooding, in a region where planned defences had been delayed and downsized.

In the midst of these floods, as Cameron promised the review that never happened, the government’s own climate change advisers told ministers there was a £500m hole in their flood defence plans, even to just to keep pace with the rising risk driven by climate change. The shortfall would result in £3bn of damages, the Committee on Climate Change (CCC) warned. The Met Office then warned in March 2014 that extreme rainfall was becoming more common in the UK.

In November 2014, another red flag was raised, in the form of a damning report from the National Audit Office (NAO). It found the risk of flooding was indeed rising as a result of government funding cuts. Furthermore, half the nation’s flood defences had been left with “minimal” maintenance, according to the spending watchdog.

The NAO also contradicted Cameron’s claim that his government was spending more than ever on flood defences. Funding had fallen by 10% in real terms, said the NAO, when the £270m of one-off emergency funding after the 2013-14 floods was excluded. The NAO noted that this bailout was poor substitute for sustained spending: “Ad hoc emergency spending is less good value than sustained maintenance.”

Later in November came the news that local authority flood defence funding would be cut by a third in 2015. “This is dire,” said Paul Cobbing, the chief executive of the National Flood Forum, which represents community flood action groups. “Lead Local Flood Authorities are at the heart of flood risk management. They are already under-resourced and this puts flood risk management backwards at the very point when a step change forwards is needed.”

“The CCC made a very clear recommendation in its statutory advice, but the government rejected it,” Daniel Johns, the CCC’s head of adaptation, said on 9 December.

Then came the flooding in Cumbria, where the Guardian revealed that a £4m flood defence scheme for the town of Kendal, which was submerged in up to 5ft of water by Storm Desmond, was repeatedly postponed. Scientists estimated that these floods were made 40% more likely by climate change.

The current floods in Yorkshire and Lancashire, with the Army mobilised and the emergency Cobra committee assembling, is the most recent red flag. But it too will sink from view under the rising tide of the UK’s increasing flood risk unless Cameron’s new review delivers a comprehensive and fully funded strategy to combat the UK’s most serious threat from global warming.