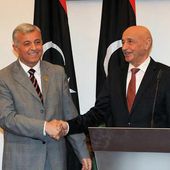 The two Libyan factions who met in Malta yesterday for historic talks on a UN plan for a unity government are likely to sign the agreement on Thursday in Morocco. Tuesday's meeting at Auberge de ...

The two Libyan factions who met in Malta yesterday for historic talks on a UN plan for a unity government are likely to sign the agreement on Thursday in Morocco.

Tuesday's meeting at Auberge de Castille followed a meeting held in Rome of a US- and Italian-led group of world powers and regional players that urged Libya's warring factions on Sunday to lay down their arms and back the new unity government. Prime Minister Joseph Muscat hosted the meeting.

Sources close to a Libyan news agency confirmed reports with this newsroom of extremist groups such as ISIS are taking over Sirte.

During yesterday’s meeting, the two sides said that they are willing to form a unity government but without the need of foreign intervention and if all the Libyan people agree to this. The Libyan leaders said that they would start to form committees as from today to work on the major points that emerged from the dialogue which would eventually lead to the two forming a unity government.

The two sides surprisingly met at Castille amid heavy security, with journalists alerted about the event just one hour before it started.

The two vowed that they would fight terrorism of all kinds, including ISIS, but did not delve into the issue on a new parliament formation since they haven’t discussed this so far.

This newsroom tried to confirm with the Maltese government reports that the two sides would meet in Morocco Thursday but as yet no official confirmation has been received.

The oil-rich country has been mired in chaos since the 2011 overthrow and killing of long-time dictator Muammar Gaddafi. The Islamic State group (IS) has exploited the lawlessness to expand its presence there.

Libyan protesters had demonstrated against a UN-sponsored agreement on forming a national unity government earlier this month. It was also reported that Libyans celebrated the fact that the two sides had rejected a UN resolution.