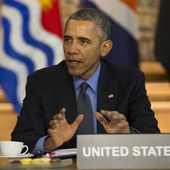 President Barack Obama warned Tuesday that persuading Russia to change course over Syria in order to tackle ISIS would take a long time. Speaking to reporters at the global climate talks in Paris ...

President Barack Obama warned Tuesday that persuading Russia to change course over Syria in order to tackle ISIS would take a long time.

Speaking to reporters at the global climate talks in Paris, he predicted that Moscow would ultimately undergo a "shift in calculations" and back away from its support for the regime of President Bashar Assad.

However, Russia needed to understand that "there is not going to be a military resolution to the situation in Syria," he said.

"Regardless of the moral equation, as a practical matter it is impossible for Mr. Assad to bring that country together," Obama said. "It is possible to preserve the Syrian state … in which the interests of various groups inside Syria are represented."

He said: "I don't expect you're going to see a 180 turn on their strategy. They have invested … for years now in keeping in Assad in power. Their presence is predicated on propping him up. So long as they are aligned with the regime, a lot of Russian resources are still going to be targeted at opposition groups that, ultimately, are going to end up being part of an inclusive government that we support."

Obama expressed optimism that pockets of cease-fires in Syria would allow various opposition groups to avoid Syrian or Russian bombings and enter dialogue. "Slowly we then are able to get everybody's attention diverted where it needs to be — going after ISIL [another acronym for ISIS] in a serious way," he said.

Obama said that Putin would not want to become "bogged down in an inconclusive and paralyzing civil conflict."

He also predicted a deal on climate change at the U.N. climate change conference, saying: "We have accomplished a lot here. I am convinced we're going to get big things done."

In tribute to his hosts, he thanked Paris for its "extraordinary hospitality" and "remarkable display of resolve" in pressing ahead with the summit some two weeks after the Nov. 13 terror attacks.

"Our hearts continue to go out to the victims' families but here in Paris we also see the resilience of the universal values we share," Obama added.

"Vive la France!" he told reporters as he departed.