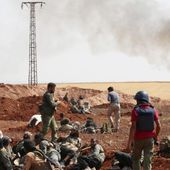 Al-Qaeda affiliate Al-Nusra Front launched the assault on Friday with a suicide attack against forces loyal to President Bashar al-Assad in Aleppo province, the Syrian Observatory for Human Rights said.

Fighting raged around the village of Bashkoy, which lies at a crossroads north of Aleppo city, Observatory head Rami Abdel Rahman said.

"Violent clashes followed the suicide attack, between the Syrian army and pro-regime militia on one side, and Islamist fighters on the other," Abdel Rahman said

At least 33 pro-regime fighters and 38 opposition fighters were killed, he added.

The toll included both Syrian and foreign fighters, who have become increasingly common among jihadist groups in the country, where more than 250,000 people have died in the nearly five-year-old war.

There was also fierce fighting in nearby Khan Tuman, a former rebel stronghold which government forces captured on December 20.

Al-Nusra and allied rebels seized several neighbourhoods in Bashkoy and clashes subsided overnight, according to the Observatory.

Eastern parts of Aleppo province are held by the Islamic State jihadist group, and the west is held by opposition groups ranging from US-backed rebels to Al-Nusra.

Regime troops have been fighting to retake southern parts of the province.

Aleppo city, too, is divided. Rebel groups control the eastern parts of the city while the west is held by regime troops.