In the summer of 2000, a Soviet-designed Proton rocket was rolled out to its launch pad at Site 81 of the Baikonur Cosmodrome, a former military black site hidden on the sprawling steppes of Kazakhstan from which the Soviet Union embarked on its conquest of space in the late 1950s.

Rockets like this one, and a myriad of others designed by legends of the Soviet military-industrial complex, had illuminated the Kazakh desert for decades — propelling amazing feats of Soviet engineering into space under the crimson banner of international communism.

But times had changed. The space race was over.

The Proton rocket set to launch that summer was plastered with a large logo advertising the American fast-food giant Pizza Hut, which helped finance the mission.

Its cargo was Zvezda, a space module in which Russian cosmonauts and American astronauts could cohabit while orbiting Earth.

Zvezda was the third piece of the International Space Station (ISS), a massive facility in space designed and constructed by NASA and its Russian counterpart, Roscosmos, and its long-awaited launch allowed the station to be officially opened for business.

Fifteen years later, ISS has the distinction of being the largest ever collaboration between nations during peacetime — a feat that earned a Nobel Peace Prize nomination.

The cost of the ISS project had been valued at up to $150 billion, and today is a partnership of 16 nations operating under the umbrella of NASA and Roscosmos — making the station one of the final frontiers of U.S.-Russian relations following almost two years of political animosity.

Sean Fuller, NASA's top official coordinating work with Roscosmos, said the ISS program's significance in U.S.-Russia relations has been its ability to draw on different approaches and experiences to find the best common path to overcome various concrete challenges.

“The strength of the program is that all of the partners have previous experiences and expertise in different areas, and while the United States and Russia have very strong histories of spaceflight, we tackle problems differently,” explained Fuller.

In 1957, the Soviet Union launched Sputnik, the world's first artificial satellite, kicking off the famous Cold War space race that continued until the mid-1970s. After the United States beat the Soviets to the moon, the U.S.S.R. shifted their focus to building space stations.

As part of the policy of detente pioneered by U.S. President Richard Nixon and Soviet leader Leonid Brezhnev, the two sides decided to use their space programs as the symbol of a new era in their tepid bilateral relations.

The product of this effort was the 1975 Apollo-Soyuz Test Project, a rendezvous between a U.S. Apollo spacecraft and a Soviet Soyuz capsule above the Elbe River in Germany. It showed what was possible, but was a one-off. Superpower tensions flared not long after and the space programs again went their separate ways.

Twenty years later, after the fall of the Soviet Union, senior leadership on both sides saw an opportunity to use their space programs as tools of reconciliation and cooperation rather than of political competition.

This was pursued in two phases. Phase One, launched under a protocol signed at the 1993 summit between U.S. Vice President Al Gore and Russian Prime Minister Viktor Chernomyrdin, initiated a program known as the Shuttle-Mir missions.

Over the course of the decade, NASA would fly 11 space shuttle missions to dock with the Soviet-built Mir space station so that the U.S. space agency could gain vital experience in long-duration stays in space.

Shuttle-Mir was an important step towards the larger vision of the Gore-Chernomyrdin agreement, known as Phase Two: the construction of a massive international space station, adapted from plans for Russia's proposed Mir 2 space station and the U.S. Space Station Freedom, both projects that were stalled in the 1990s amid post-Cold War budget cuts.

Snapshot of a Partnership

NASA's Fuller joined the U.S. space agency out of college in 1996, and has made a career of working with the Russians following his first visit to Moscow in 1997 as a NASA space shuttle mission planner.

“It was a new experience,” he said, “I still remember that first time I walked onto Red Square thinking 'by golly, I never thought I'd be here.'” Over the last two decades, Fuller has worked at various levels of the partnership, fostering deep relationships with his Russian counterparts.

Fuller describes his bonding with Russian space officials in a similar way to other NASA officials who have been living, working, or traveling to Russia since the mid-1990s: things were awkward at first, but people quickly warmed up to each other.

For Fuller, it began in 1997 at a picnic with a few Roscosmos officials in Alexandrovsky Sad outside the Kremlin. “We really got to know each other on the personal level, about lives and families … it really created a good bond that continues to this day.”

Since those early meetings, Fuller has made his way to the top of NASA's organizational structure in Moscow, surviving marathon meetings with Roscosmos officials that concluded with feasts and toasts proposed to cooperation in space — an experience Fuller described soberly as “a bit different … operating.”

Today he presides over a permanent NASA contingent of no fewer than 30 employees spread between three Roscosmos facilities in Moscow's surrounding region — the U.S. agency even rents an entire floor of a Moscow hotel to house its personnel.

Fuller manages everything from his small office in Roscosmos headquarters at Prospekt Mira. There he coordinates regularly with senior Roscosmos leadership, and even works with Russian space companies like RSC Energia and the Khrunichev Space Center.

But most of the action happens at Russia's Mission Control Center in Korolyov, a town just outside Moscow named after the Soviet Union's most esteemed rocket designer — Sergei Korolyov.

“Our job specifically is to be there working with their flight control team,” said Keith Zimmerman, a NASA flight controller who has rotated in and out of Russia's mission control center for 20 years.

Teams of four rotate the day and night shifts so that NASA has people in Russian mission control at all times to ensure communication with flight controllers in Houston.

While groups of Russian and U.S. flight controllers working on certain parts of the ISS talk to each other regularly, Zimmerman's team is there to facilitate communication between groups that work together less frequently, and — of course — coordinate responses to emergency situations.

Getting to Know One Another

Establishing this relationship took time. During the Shuttle-Mir program, the Russian side had to overcome a deep suspicion of U.S. scientists stealing secrets, concerns stoked by nosey NASA engineers asking too many questions about how Mir worked.

“We started asking questions about their space station systems because we didn't have any space station of our own yet, and we were still working on building one,” said Zimmerman

“They thought that we might be trying to steal their ideas and technology to design our own station,” Zimmerman said, though they eventually understood the intent was to ensure the shuttles could work with Mir systems, and this required a basic understanding of how the station worked.

Beyond trust issues, there were cultural differences that had to be understood and bridged — a problem that NASA officials in Russia say most often got in the way during planning for missions.

“With spaceflight, a lot of it is driven by hard physics, so a lot of the technical stuff is pretty well defined by physics, and it really comes down to how you operate and plan it within those rules,” Zimmerman explained.

This is where approaches differed, a product of the kinds of missions the two space agencies had been planning and executing in the final decade of the Cold War.

NASA in the 1970s developed space shuttles in anticipation of building a large space station, but the funding never materialized. The Soviets jumped straight into space station design, mastering the art, but never succeeded in fielding its own copy of the U.S. shuttle to service them.

Therefore, NASA planning was geared toward making the most of the shuttle's two-week flight times, with plans constantly being optimized and revised over the 18 months leading into a launch, and then daily during a mission.

The Russians were approaching the operation of their Mir space station in a completely different manner, leading to some frustration when the two sides came together to plan missions in which the space shuttle would visit Mir.

“On the shuttle we were very detailed, every minute was laid out, because there was limited time,” Fuller explained. “But we learned pretty quickly that its okay to operate that way for a week or two, but it you're living in space for six months, that's going to get old real quick.”

Likewise, Fuller said that in the beginning, the way plans were drafted caused friction. While NASA was making plans on computer software that allowed changes to be made quickly and effortlessly, Roscosmos was adamantly opposed to most changes.

Their opposition was largely based on how Roscosmos drafted plans — on a giant scroll drawn out box-by-box by a man and a drafting board. To make a simple change required the entire scroll to be remade.

“So we learned a lot of that from the Russian [space] culture, but then likewise as we moved on to ISS we developed a next-generation computer planning tool, and they were brought in to that [program] so we had a kind of melding of the two approaches for ISS,” he said.

According to Fuller, this ability to merge strengths and approaches to spaceflight is the essence of the ISS program's success. As problems were ironed out, they were left with a better approach to sending people to space.

In terms of co-managing a station, NASA officials say that today they do not encounter major problems with their Russian colleagues, though sometimes disagreements happen — be it over fixes to common problems, launch schedules for Russian or U.S. rockets, and so on.

“I think we are definitely the more flexible ones,” Zimmerman said. “If there are a couple of options to address the problem, and the Russians are just absolutely insisting that it has to be this or that for whatever reason, we will — more often than not — agree to their option.”

These problems are minor, and the growing pains of Shuttle-Mir feel far away. For 15 years, ISS has been successfully co-managed by Russia and the United States, and has grown to become a massive 1 million pound structure in orbit.

Though U.S.-Russia relations turned turbulent in 2014, the two sides agreed this year to extend the ISS program until at least 2024 — four years beyond its original planned conclusion. Observers on both sides doubted this was possible in the current political climate.

As Fuller acknowledged, “as things in the world have changed, there [remains] certainly a strong interest in both governments — actually in all of the governments involved — and ISS has shown what we can achieve together.” 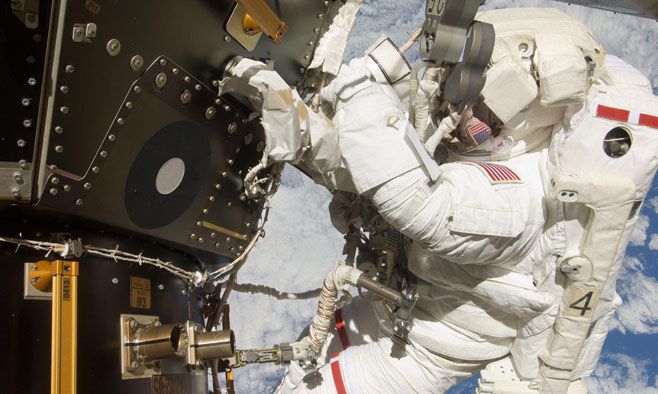 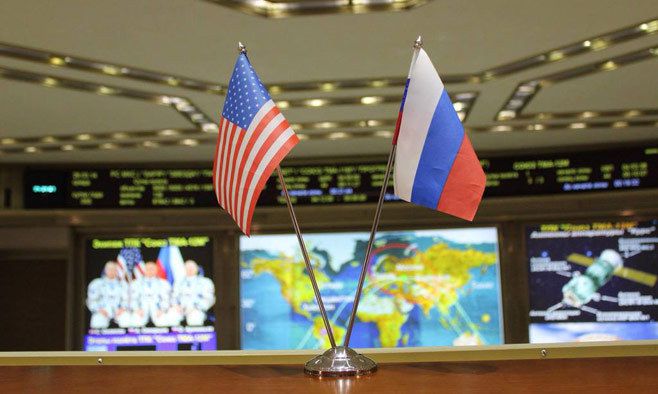