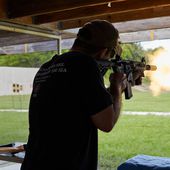 Where Support for Assault Rifles Is All in 'Good, Clean Fun'

SUNRISE, Fla. — As Eddie Pereira helped his 15-year-old nephew fire a semiautomatic assault rifle for the first time, Mr. Pereira’s son, a more experienced shooter, snapped pictures of the rite with a phone.

Mr. Pereira, 45, is a regular at the target range here at Markham Park, a county-run recreation area outside Fort Lauderdale that offers family camping, boating, biking, a dog park, a nature trail and, at the far end, a 100-yard shooting range.

Arguments over gun control may boil in some quarters. But here, canoers, bird-watchers and even the dogs paid little heed to the distant crackle of gunfire. On the range itself, dozens of people practiced shooting with the very kind of rapid-fire, high-capacity weapons used in recent mass murders in California and Colorado and others before — the kind that President Obama and many others say should be banned.

Mr. Pereira, his brother and their two sons were trying out his new AR-15-style rifle, the country’s best-selling style of long gun, which looked as if it came straight out of a commando movie. He bought it for $600, then personalized it with $400 worth of accessories like different sights and grips. He has a 30-round magazine so he does not have to reload too often.

“I like the way it looks, and I like the sport of it,” said Mr. Pereira, who runs a business transporting construction materials. “It’s good, clean fun.”

“And I have it if I ever need it for personal protection,” he added.

In his Oval Office address on Dec. 6, Mr. Obama expressed the exasperation shared by millions of Americans: How can we not limit weapons that can kill dozens in minutes? Why would any sport shooter need extra hand grips and a magazine holding 30 or even 100 cartridges?

Many gun enthusiasts express deep exasperation of their own. They argue that most non-shooters do not understand the technology and appeal of modern weapons that are widely used for target shooting and, increasingly, hunting. They say proposed bans would do nothing to prevent crime or even lessen the toll of mass shootings.

“From my experience, the bad guys are always going to get the guns, and gun control is only going to affect law-abiding citizens,” said Oscar Plasencia, 57, a retired police officer who was practicing on a recent Saturday at the Markham Park range.

Mr. Plasencia uses an AR-15 model with just a five-round magazine when hunting deer, and said it was no different from many other semiautomatic hunting rifles.

“I have a 30-round magazine in my AR at home, for home defense,” he added.

Variants of the AR-15 design, a civilian version of the military’s M-16 without the capacity to fire in automatic bursts, have in recent years been the highest-selling rifles in the country, according to the National Shooting Sports Foundation in Newtown, Conn., the trade association for the gun industry.

Less common but also popular are models based on the AK-47, the Soviet-designed assault weapon that is widely used worldwide. Both designs are off patent and produced by dozens of companies.

American sales of these rifles, as indicated by production plus net imports, reached 1.5 million in 2012, far higher than in any previous year, according to foundation estimates.

Sales have remained brisk over the last three years and appear to have surged in recent months, suggesting that more than 10 million “modern sporting rifles,” as the foundation has sought to rename them, are in circulation in the United States.

The foundation says that only “cosmetic features” distinguish these rifles from other common firearms and that it is misleading to call them assault weapons no matter how menacing they may look to some.

“Consumers like the design, and they’re voting with their wallets,” said Larry Keane, the senior vice president and general counsel of the foundation. Made with lightweight aluminum and polymers, they are easy to hold, have little recoil, are durable and accurate and have modular components, enabling buyers to customize their weapons.

With semiautomatic rifles and pistols so ubiquitous, many gun control advocates now place a higher priority on measures like expanded background checks, to help keep guns out of the wrong hands, than on pursuing a ban on particular designs.

At the same time, many remain convinced that some restrictions on the weapons would be worthwhile, especially a limit on magazines larger than 10 rounds, which could slightly slow down a mass killer.

“Just because these weapons are becoming more popular is not a reason that they should be accepted without question,” said Josh Horwitz, the executive director of the Coalition to Stop Gun Violence.

“Many people find it fun to shoot lots of rounds, and I don’t dispute that,” he said. “I just think we don’t have the right balance here.”

Defining an assault weapon in the civilian market has always been difficult. Starting in 1994, Congress banned sales of semiautomatic assault weapons, defined as those with a detachable magazine and any two of several traits defined as military features, like pistol grips and folding stocks on rifles and second grips on the barrels of handguns. Also banned were magazines holding more than 10 rounds.

But the law expired in 2004 and was not renewed, as opposition to gun control hardened and as no strong evidence emerged to indicate it had reduced gun violence.

Now, seven states have similar bans, including California. But gun manufacturers have adapted their designs to comply with the laws; the twoAR-15 models used by the attackers in San Bernardino, Calif., this month were not banned, although the 30-round magazines the killers used are illegal in the state.

Democratic proposals now before Congress would be somewhat more restrictive than the previous federal ban. They would prohibit sales of semiautomatic rifles and pistols that combine detachable magazines with only one other “military feature” from a list of physical traits and, again, would prohibit magazines holding more than 10 rounds.

Here at the gun range, opinions varied on gun control more broadly, with some saying they could support stronger efforts to keep guns out of the hands of criminals and the mentally disturbed. But nearly everyone seemed to feel that controls on semiautomatic rifles and large magazines would be futile.

One of the features described in the legal bans as “military,” and by the gun industry as “cosmetic,” is a pistol grip on rifles — a handle beneath the trigger. This makes it easier to hold the rifle steady while firing repeatedly, a desired feature to shooting enthusiasts.

But Mr. Horwitz, of the gun-control coalition, sees the feature differently.

“Traditional hunting rifles are very accurate on the first shot,” he said, which is usually all one gets when hunting game. “The pistol grip allows the same accuracy on rounds two to 100, a very helpful addition when the shooter is aiming at people.”

Scott Pechnick, the creative director of an ad agency, brought an AR-15, an AK-47 with an antiquated-looking wooden stock and banana clip, a traditional rifle and a Glock semiautomatic pistol to the Markham Park range.

“I enjoy shooting — to me it’s a stress reliever,” he said. “I’m also a firm believer in self-defense.”

Mr. Pechnick, 31, said he favored wider background checks and thought that someone should be monitoring large purchases of ammunition. “You can buy 1,000 rounds of ammunition online and nobody says anything,” he said, adding that banning the rifles seemed pointless.

Mr. Pereira’s nephew Joey, the 15-year-old who was shooting an AR-15 for the first time, said that the recoil from the first shot had come as a shock, but that after that “it wasn’t that bad.”

His father, Jorge Pereira, said he did not share his brother Eddie’s love of guns but saw nothing wrong with it, “and I’m a registered Democrat.”

If there were no guns in the world already, he said, a ban on assault weapons might make sense. But now, he said, “I’m not sure that a ban is going to do all that much.”

What is more, he added, “there’s a sizable population out there that would see it as a call to revolution.”