loading...
(adsbygoogle = window.adsbygoogle || []).push({}); Russia has a 'plan B' for Syria that would allow it to 'redefine the international order' - Algeria latest news 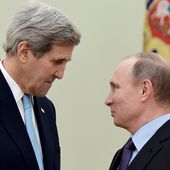 Russia's pattern of airstrikes in Syria indicate that it is preparing a "plan B" should the regime fail to restore a central Syrian state and be forced to retreat to a fragment of government-held ...

Russia's pattern of airstrikes in Syria indicate that it is preparing a "plan B" should the regime fail to restore a central Syrian state and be forced to retreat to a fragment of government-held territory along the Mediterranean.

"A second option [for Russia] is to fall back to the defensible parts of useful Syria after guaranteeing the safety of the Alawi canton," Joseph Bahout, a visiting scholar in the Middle East Program at the Carnegie Endowment for International Peace, wrote of Russia in Carnegie's "Syria in Crisis" blog.

"This is perhaps already a consideration, as the majority of Russian airstrikes concentrate on the contours of this area."

Since intervening on behalf of Syrian President Bashar al-Assad in late September, Russia has used airstrikes to create a buffer zone between rebel-held territory in the southern Idlib province and the traditional homeland of the Assads' Alawite sect in the Latakia governorate.

"Based on the majority of Russian air strikes and SAA [Syrian Arab Army] fighting, the regime and Moscow are securing an Assadland or Alawistan," Boris Zilberman, a Russia expert at the Foundation for Defense of Democracies (FDD), told Business Insider on Thursday, referring to a term used by the foundation's Tony Badran to describe the Alawi enclave in Latakia.

"The regime is taking land they think they can hold with the assistance of Russian air power. So first and foremost they are securing the regime."

To be sure, Assad's forces, with Russian air cover, are still battling to retain control over the two most symbolically and strategically important cities in Syria. Those are Damascus, the capital — which has been long viewed by rebel forces as the key to winning the war — and Aleppo, Syria's second-largest city and main urban center in the north.

But even if the regime were to drive the rebels out of Aleppo and Damascus, holding the cities would require a significant commitment of funding and manpower.

The SAA was fatigued, overstretched, and nearing the point of collapse before Russian air cover helped the army regain territory. It would likely either need to be completely revamped, or Russia would have to devote ground troops to fortifying the cities against counterattacks that would likely continue as long as Assad is in power.

Solidifying a Russian "protectorate" in western Syria that is already held by the regime and dominated by a sect of Shia Islam loyal to the Assads, however, would give "a tangible reality to Moscow’s concept of a new international order."

That's according to Marc Pierini, a visiting scholar at Carnegie Europe and a former EU ambassador, who wrote in Turkey's English-language newspaper Hurriyet in September.

"To its snap annexation of Crimea and dominance of eastern Ukraine, Russia is now adding 'Assadland,'" Pierini wrote. "In doing so, it is showing the rest of the world that it has the capacity to redefine the international order, or at least the guts to act as spoiler in chief."

'An acceptable lesser of many evils'

Mark Galeotti, a Russia expert and professor of global affairs at New York University, agreed that while an "Assadland" or "Alawistan" would not be the Kremlin's first choice, it is "an acceptable lesser of many evils" for Russia.

"It is not that Moscow would be happy with an Alawite statelet, but it is obviously and inevitably thinking of fallback options should it not get its ideal, which is an outright victory for Damascus," Galeotti told Business Insider on Friday. "Given that the Russians are not so naïve as to consider that a done deal, or even a likelihood, they will also have alternatives under consideration."

He added: "A defensible, economically viable and politically more homogeneous 'Alawistan' would both ensure they retain a client-ally in the region and yet also be a much more manageable unit to have to support and project."

It would also be appealing to Assad. A statelet in the west would ensure that the regime retains access to its key partner, Hezbollah, as well as to potential offshore energy in the eastern Mediterranean.

Significantly, this "solution" would likely be unacceptable to the predominantly Sunni interior and periphery of Syria that has been fighting to see Assad completely out of power — or dead — for nearly five years. Moreover, as Zilberman of the Foundation for Defense of Democracies said, an Assad stronghold along the coast would "continue to be a great recruiting tool for jihadis."

With negotiations over Syria's future due to begin in late January with Assad at the table, however, the partition of Syria in a way that would protect him and his family — and ensure Russia's continued relevance in the region — could very well form part of a negotiated long-term "solution" to the conflict.

"If you are part of, or back, the Syrian regime, it makes sense right?" Zilberman said. "If you can make it through this and retain some sort of state that the Assads can control in the future, then you've won."