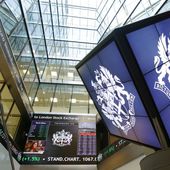 The London Stock Exchange is in talks to merge with Germany's Deutsche Börse in a deal that would seal an alliance first discussed at the turn of the millennium. The LSE confirmed on Tuesday it was

The London Stock Exchange is in talks to merge with Germany’s Deutsche Börse in a £21bn deal that would seal an alliance first discussed at the turn of the millennium.

The LSE said on Tuesday it was in detailed discussions with its German rival about an all-share merger. Under the proposed structure, the balance of ownership favours Frankfurt, with Deutsche Börse shareholders owning 54.4% of the combined company and LSE shareholders holding 45.6%. However, the merged company’s board will have equal numbers of members from each business.

The UK exchange said: “The boards believe that the potential merger would represent a compelling opportunity for both companies to strengthen each other in an industry-defining combination, creating a leading European-based global markets infrastructure group.”

The exchanges have considered combining forces before. They agreed to merge in 2000 before a rival bid for the LSE from Sweden’s OM Gruppen scuppered the deal, which was then rejected anyway. The LSE then rejected a formal £1.3bn offer from Deutsche Börse in January 2005.

The LSE confirmed the latest talks after its shares surged in response to a Reuters report about a possible merger. LSE shares jumped 17% to £27.06, valuing it at about £9.5bn. Deutsche Börse shares rose 7% to €81.71, giving it a value of almost £12bn.

Xavier Rolet, the LSE’s chief executive, and Carsten Kengeter, the boss of Deutsche Börse, are both keen dealmakers and Rolet said last year he expected to merge with a big rival. Rolet has expanded the LSE by buying a number of businesses, including LCH.Clearnet, which gave the UK company a clearing house for trades in derivatives – contracts that allow traders to bet on movements in asset values.

The two businesses do not work together and the companies are understood to believe combining them would bring in more business from customers who would benefit from lower costs and reduced capital requirements for their trades.The LSE said a merger would generate extra revenues and cost savings, while creating a powerhouse in the world of derivative trading. Deutsche Börseowns Eurex, Europe’s largest derivatives exchange, and the LSE operates SwapClear, a clearing service for over-the-counter derivatives.

David Cheetham, a market analyst at the foreign exchange broker XTB.com, said: “If the deal were to go ahead it would create a clear market leader for Europe and one of the largest exchanges in the world for trading and risk managing derivatives.”

If a deal is agreed, all major business divisions would operate under their existing brand names and the merged company’s board would have equal numbers of members from each side. The LSE declined to comment on who would lead the company or any aspects not covered in its official announcement.