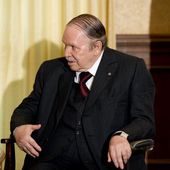 ALGIERS - When Arab League foreign ministers voted by a majority earlier this month to declare Hezbollah a "terrorist organisation", Algeria stood with Lebanon, Iraq and Syria in rejecting the move

ALGIERS – When Arab League foreign ministers voted by a majority earlier this month to declare Hezbollah a “terrorist organisation,” Algeria stood with Lebanon, Iraq and Syria in rejecting the move.

According to an adviser to Algerian President Abdelaziz Bouteflika, the country’s refusal to side with Saudi Arabia and the Gulf monarchies against the Lebanese militia was based on a “principle of non-interference” in other countries’ affairs set out by the president himself.

“Bouteflika is always the one to decide. And he has been very clear: ‘Negotiating Algeria’s principles is out of the question’,” the adviser told Middle East Eye.

The adviser went on to describe what Bouteflika had said in private prior to the Arab League meeting.

“All my life, even before becoming president, I have defended the principles of non-interference and movements of resistance against occupation,” Bouteflika is alleged to have said.

“It is my position and that of Algeria, as well as that of its people.”

The targeting of Hezbollah at the 11 March meeting in Cairo came amid tensions between Saudi Arabia and Iran, the main supporter of Hezbollah, and after the Gulf Cooperation Council (GCC) had already agreed to crack down on the group, accusing it of “recruiting young people [in the Gulf] in order to carry out terrorist acts”.

Since then alleged Hezbollah sympathisers have been expelled by Saudi Arabia, Bahrain, Kuwait and the UAE.

Three main reasons explain Algiers’ position, according to sources close to the government.

The first and foremost is the policy of non-interference articulated privately by Bouteflika and publicly by Algerian Foreign Minister Ramtane Lamamra earlier this month.

“Algeria, for which non-interference in the internal affairs of other countries is one of the guiding principles of its foreign policy, abstains from any interference in an issue which concerns the Lebanese people exclusively,” Lamamra said in reference to Hezbollah, speaking prior to the Arab League announcement.

But Kamel Mansari, chief editor of the Algerian Le Jeune Independant newspaper, told MEE that Algeria’s adherence to that principle had put it at odds with Saudi Arabia.

Algeria had already refused to participate in international coalitions in Syria and in Yemen with Saudi Arabia and some other Arab League states because of the principle of non-interference, he said.

“Lamamra reminded the Arab League that it does not need to have a joint force since its charter states that it is designed for settling disputes amicably,” said Mansari.

“He also said that the Algerian army never intervenes in other countries. But what upset the Saudis most was that we were suggesting mediation through Iran.”

Mansari said one of Saudi Arabia’s main motives in classifying Hezbollah as a terrorist group was to put it in the potential crosshairs of the international coalition currently conducting air strikes against the Islamic State (IS) group and other internationally recognised terrorist organisations such as the al-Qaeda-affiliated Nusra Front in Syria.

Hezbollah has sent fighters to support the government of Syrian President Bashar al-Assad in the country's five-year civil war, while Saudi Arabia has backed religious opposition groups such as Jaish al-Islam.

“Knowing that its indirect allies, the Nusra Front and Jaish al-Islam, which it has helped and armed, are excluded from the UN truce as terrorist organisations, the Saudi kingdom wants to also exclude Hezbollah. Except that in that case, it is Damascus, as the ’legal’ regime, that asked for its assistance,” said Mansari.

The second reason for Algiers’ reluctance to confront Hezbollah, according to the presidential adviser, is the perspective brought by the country’s own history of fighting French colonial rule.

“Algiers has always advocated for a true and fair definition of terrorism instead of a classification based on the balance of power of the moment. For us, making the distinction between resistance movements and terrorist organisations is essential,” he said.

“At the UN or the Arab League, Bouteflika has always defended Hamas and Hezbollah which fight, according to the Algerian doctrine, against occupation. Remember the Algerian FLN [the National Liberation Front which led the fight for independence and still dominates Algerian politics] was once accused of terrorism!”

An Arab diplomat in Algiers recalled how Algeria had once also blocked moves by Saudi Arabia to put Hamas on the Arab League’s designated list of terrorist organisations.

“The Saudis wanted Hamas on the list because of their conflict with the Muslim Brotherhood in Egypt and elsewhere in the Arab world. But Algeria vetoed it by imposing the wording ’movement of resistance’ [into the proposed text],” the diplomat told MEE.

The third argument that influenced Algiers’ position is its status as a guarantor – with Saudi Arabia being another – of the Taif Agreement which ended Lebanon’s 1975-1990 civil war and was signed in the Saudi city in 1989 under the guidance of Algerian diplomat Lakhdar Brahimi.

“Hezbollah is a politico-military movement which is part of the social and political landscape of Lebanon, and also part of the fragile balance of the country negotiated patiently and with much effort,” Lamamra said earlier this month.

According to Mansari, for Algeria to condemn Hezbollah as a terrorist organisation would also mean disavowing the Taif agreement and its efforts to integrate the group in Lebanese political life.

That view is echoed by Abdelaziz Rahabi, a former diplomat who participated in the negotiations at Taif.

“Lakhdar Brahimi did all he could, under the pressure of the Lebanese themselves, to integrate Hezbollah and every other entity representing a Lebanese faction in reaching a consensus.”

But, he added: “Algiers makes a distinction between political movements and military activism beyond Lebanese borders.”

But while Algeria’s stance is based on clearly stated ideals, analysts say it is not always a line that is easy to hold when foreign policy principles collide with the reality of events on the ground.

“Algiers opts for a policy which reconciles the fundamental principles on which its foreign policy is based with political realism – but it’s not always simple,” political scientist Cherif Driss told MEE.

“All the more so as the aggressiveness of some countries like Saudi Arabia and Turkey on Syria have only complicated Algeria’s position.”

“We’ve paid the full price for this policy at the risk of finding ourselves isolated within the Arab League, but the president clearly stated Algeria’s position,” he said.

“Eventually, even our Saudi friends, as in Taif, will come back to us for the arbitration of crises. That, at least, is Bouteflika’s conviction.”