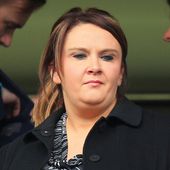 Margaret Byrne has announced her resignation as Sunderland chief executive with immediate effect over her role in the Adam Johnson criminal case. Byrne said in a statement: "I recognise that, as ...

The Sunderland football club chief executive, Margaret Byrne, has resigned over her handling of the Adam Johnson child sex abuse case, admitting she made “a serious error of judgment”.

Byrne quit her £663,000-a-year role after facing days of pressure to explain why the midfielder was allowed to continue playing despite having privately admitted he had kissed and groomed an underage schoolgirl.

In her resignation statement, Byrne said it was a “serious mistake” to allow Johnson to continue to represent the club. “I sincerely regret that this error has impacted on the victim, the club, its supporters and all those affected in such a devastating manner.”

Johnson is facing between five and 10 years in prison after being found guilty of sexual activity with a child and pleading guilty to two other counts. He was acquitted of one further charge.

Sunderland lifted Johnson’s suspension on 18 March last year – 16 days after his arrest – and he played until he was sacked, 24 hours after he pleaded guilty to two child sex offences on 10 February.

Byrne’s resignation came hours after the Guardian approached Sunderland football club with fresh evidence that she knew Johnson had admitted to sexual activity with an underage schoolgirl as long ago as May last year.

Johnson’s barrister, Orlando Pownall QC, wrote in a legal note shortly after the midfielder’s arrest that he admitted kissing the 15-year-old and sending her flirtatious messages.

The six-page memo, disclosed for the first time on Tuesday, was written by Pownall the day after a crucial meeting with Johnson and Byrne on 4 May last year.

In the memo, Pownall details the allegations and the evidence against Johnson. The note states that Johnson admitted kissing the teenage Sunderland fan passionately and that she was too young to give consent.

It also raises the prospect of the footballer pleading guilty to that charge of sexual activity with a child – which he publicly denied until the first day of his trial on 10 February.

Byrne is understood to have played a leading role in recruiting Pownall and introduced him to Johnson at a meeting at Sunderland’s training ground, the Academy of Light, on 4 May last year.

It is at this meeting that Byrne, a former criminal lawyer, provided Pownall with copies of Johnson’s police interview – in which he admitted kissing the girl – and his 834 sexually charged WhatsApp messages. Johnson’s trial was told that the football club had no notes of the meeting, which was also attending by the footballer’s father, Dave.

In her resignation statement, Byrne admitted receiving the note but said she did not disclose it to anyone, including the Sunderland board.

She said she was “astounded” when Johnson pleaded guilty and that allowing him to play again was a “serious error of judgment”.

Byrne added: “Mr Johnson’s victim has endured a terrible ordeal and for that I am truly sorry. At no time was the failure to suspend him again intended to cause any harm or distress to her or her family.”

Byrne is understood to have returned to the UK this week after leaving the country towards the end of Johnson’s trial when the club came under fire.

In a separate statement, the club said it had “become clear through our own internal investigations that in this instance decisions have been taken by Margaret in error”.

“Whilst swift and decisive action was taken to terminate Mr Johnson’s employment upon his guilty plea, decisions taken prior to this, including the decision not to suspend him for a second time pending the outcome of the trial, were wrong.

“In light of what has been acknowledged by Margaret as a serious error of judgment on her part, we have undertaken a full review of the club’s decision-making processes to ensure that there can be no such mistakes in the future.

“Throughout this deeply regretful situation, we recognise that one devoted young fan and her family have been very badly let down, first and foremost by Mr Johnson and his despicable actions, but also by the club they support. We are so very sorry for this.

“Mr Johnson lied to the club; he also lied to our fans and they have every right to feel aggrieved by this. Lessons have been learned and we hope that the club and its fans can move forward from this together.”